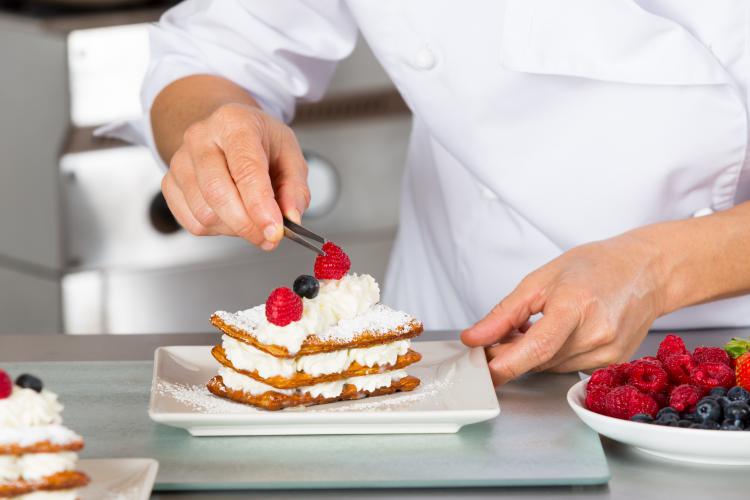 Microbes can be divided into the following categories:

Microbes are very small organisms invisible to the naked eye of a human, but they exist everywhere around us. Microbes can be found in the water, air, soil, dust, in humans and animals, and in the food we eat. Not all microbes are harmful (in fact, some microbes are beneficial for humans and are used in the food industry), but it is important for a food operator to be aware of microbial growth conditions and food poisonings that contaminated food may cause.

Bacteria are single-cell organisms that reproduce by dividing in two. Different types of bacteria require different conditions for survival. Some prefer warmer or colder environments. Bacteria can be divided into three groups according to their temperature preferences: psychrotrophs, mesophiles and thermofiles (see more info below). Some may need oxygen in order to survive, others don’t. Bacteria that need oxygen are called aerobic, while bacteria that survives without oxygen is called anaerobic. Facultatively anaerobic bacteria is a type of bacteria that can proliferate both in aerobic and anaerobic conditions. Most of food poisoning bacteria belong to this group. Some bacteria can produce spores that can resist unfavourable conditions and later, when conditions become favourable, again develop into reproductive cells.

Compared to other microbe types bacteria is the type that needs more moisture to multiply. The more humid the environment, the better it is for bacterial multiplication. In terms of acidity, bacteria prefers neutral levels of pH 6-8.

Best foods for bacterial growth are protein-rich foods, such as, meat, poultry, fish and foods that contain them.

Viruses in contrast to bacteria are no-cells organisms, which means that they are not living organisms as such. They consist of one or more molecules and need a living host cell in order to reproduce. Viruses tolerate cold environments and may survive for months at the temperatures below +10°C. Viruses also tolerate acidic environments, certain types of viruses (for example, norovirus, rotavirus and enterovirus) survive even at pH 3. However, viruses may be killed by heat - heating to +60°C kills most viruses.

Yeasts and moulds are most commonly known fungi. Moulds grow in the form of multicellular filaments which together form a network called mycelium. For nutrition they use paper, wood and all foodstuffs. Moulds need oxygen for growth, that's why they grow on the surfaces of foodstuffs. Compared to other microbe types moulds need the least amount of moisture. They also grow in acidic environments (such as jams and juices). Their preferable range on the acidity scale is pH 3-5, and preferable temperature range is 20-45 °C.

In the food industry some moulds have beneficial use, for example in the cheese production and in the production of penicillin. The harmful effects of moulds include food spoilage and food poisoning with mycotoxins. Heating to the temperatures of +70 - +80 °C will kill both the moulds and their spores. However, there is a risk that harmful mycotoxins will remain poisonous even after heat treatment.

Yeasts are single-celled fungi. Yeasts require sugars for growth and thrive in jams, sugary juices and berries. Their preferred temperature range is 20-35 °C and pH 5 on the acidity scale. Yeasts require oxygen for multiplication, but they can also survive in anaerobic environment. Yeasts require higher moisture levels than moulds. Certain yeasts are used in the food industry (e.g. wine and beer production), however, yeasts can cause food to spoil. Yeast cells die at the temperatures over +45 °C. In order to kill yeast spores higher temperatures are needed (+70- +80 °C).

Protozoa are single-celled organisms that exist in moist environments such as marine and fresh water as well as the soil. Protozoa occurs in two forms: trophosomes and cysts. Cysts are a durable form of protozoa that can resist unfavourable environmental conditions such as heat, dryness or chemical treatment and may survive for long periods of time. Protozoa food poisonings mainly occur due to faecal contamination of drinking water or contaminated irrigated water.

Microbial growth depends on a certain combination of the following environmental conditions: presence of oxygen, nutrition, moisture, acidity and temperature.

Presence of oxygen is one of the requirements that several types of microbes need in order to reproduce. For some microbes low level of oxygen is enough while others may multiply even in the oxygen-free environment (e.g. Salmonella, Bacillus cereus and Listeria monocytogenes bacteria multiply both in the presence and absence of oxygen). Microbes that can multiply in the absence of oxygen (i.e. in anaerobic conditions) are called anaerobes.

In order to be able to live and grow microbes need nutrients. Food and food residues on the kitchen equipment, utensils and surfaces provide favourable conditions for microbes to feed and grow.

Microbes need at least some amount of moisture to multiply. Moist areas such as bathrooms and kitchen surfaces are most suitable for bacterial growth. Water contained in foods also represents suitable conditions for microbial growth. The more other substances like sugar and salt are dissolved in the water, the less free water is available for microbes. Free water contained in foods, which is not bound to food molecules, is defined as water activity. Water activity and moisture is not the same thing. Certain foods can have same moisture level, but different levels of water activity. Examples of foods with low water activity, which prevents microbes from multiplying, are cookies, dried fruits, soy sauces and jams. Most food poisoning bacteria require high levels of water activity (over 0.95), and most food-borne bacteria require at least 0.90. Moulds are microbes that require the least amount of water activity in foods in order to multiply. That’s why mould can sometimes appear on the surface of a jam even though jam has low water activity.

The multiplication of bacteria in highly acidic foods is typically hindered, therefore they can be stored longer without spoiling. In addition, preserving agents such as vinegar or citric acid can be added to food to prevent bacterial growth and increase storage time.

The most vulnerable foods for microbial growth are pH neutral foods such as milk, eggs, fresh meat and fish, cooked rice, fresh butter and plain yogurt.

While acidity, level of oxygen and amount of moisture in foods may be alternated only to a certain extent, the temperature is the main factor which helps to control microbial multiplication.
Based on the temperature preferences microbes can be divided into three categories: psychrophiles, mesophiles and thermophiles.

Psychrophiles are microbes that prefer relatively low temperatures for growth.

Mesophiles prefer room and body temperatures of +25 - +40 °C but can multiply also between +15 and +45°C. These bacteria can be found on human and animal skin and intestines, and in the soil.

Thermophiles are organisms that tolerate high temperatures up to +75°C with the optimum conditions for growth between +50 and +70 °C.